The QWERTY keyboard layout as the default #

Many years ago, I used to type in the QWERTY layout, which is very widely used as it is the default keyboard layout in almost all physical computer keyboards and computer software. I mostly used a weird self-devised hunt and peck method utilizing only two to four fingers per hand. My maximum typing speed in QWERTY was just around 40 to 50 words per minute.

On my mobile devices, I used and I still use the default QWERTY layout for virtual keyboard. One of the design goals of QWERTY more than a century ago was separating the most commonly used key combinations to stop a typewriter machine from jamming. While this is unnecessary for modern physical computer keyboards, it can be argued that this would coincidentally also stop two fingers from jamming on a small touch screen.

I have a photo of a typewriter that I took during my visit to a museum. A careful reader may notice that M key is not observed to the right of N key in the pictured typewriter, indicating that its position is different from that in modern QWERTY. 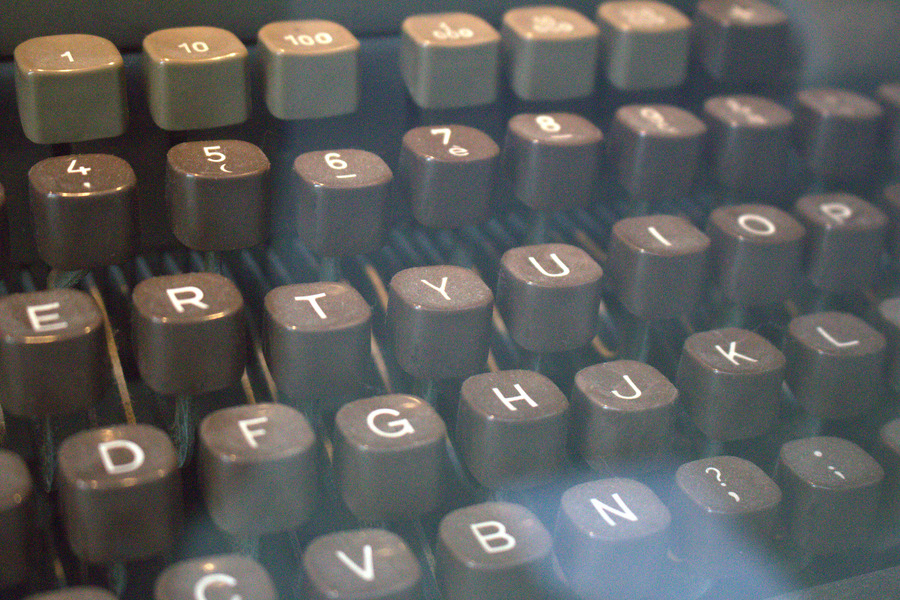 I remember learning about the Dvorak keyboard layout from comments on Hacker News in around 2015 to 2016 although I lost the links to the exact threads I read. At the time I had the idea of learning to touch type properly to increase my typing speed, and the suggestion of starting over with an alternative layout was a great inspiration.

With determination I proceeded to try out the Dvorak layout. Learning to touch type in Dvorak was not as hard or time-consuming for me as some other learners described. The absence of cognitive dissonance because of my lack of experience in touch typing in any keyboard layout could be advantageous in my learning process. I could listen to irrelevant presentation videos while simultaneously practicing typing on a Dvorak keyboard training website with a Dvorak layout reference diagram on-screen, which I used until I felt confident to switch the keyboard layout in the operating system I used to Dvorak.

There is no need to memorize the key mapping table for QWERTY to Dvorak. This brings the advantage of having the physical QWERTY keyboard useless to look at while typing in Dvorak, which forces one to learn to properly touch type.

After much practice in a few months, I managed to increase my typing speed in Dvorak from 0 to a maximum of around 80 to 100 words per minute. Ever since then, I have been exclusively typing in Dvorak on physical keyboards.

Note that I am unable to conduct a fair comparison on typing speed between QWERTY and Dvorak since I never fully touch type in QWERTY. Nonetheless, it has been reported that switching from QWERTY to Dvorak or other optimized alternative layouts does reduce occurrence of finger pain and typing errors. Some studies and anecdotes linked in this post contain more information on that matter.

I found a photo in my phone photo library of an old keyboard, which I already threw away after I fried it by accident. Back when I was learning to type in Dvorak, I re-arranged the key caps on that keyboard as it was fun to see that happen. 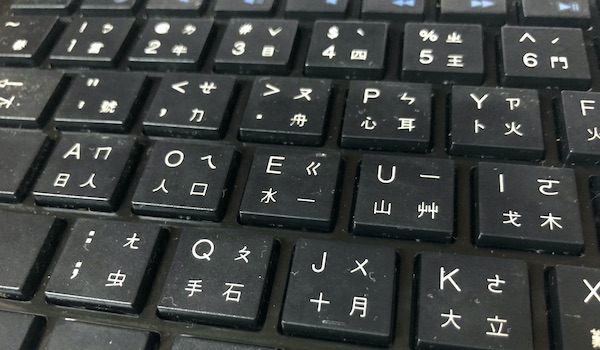 Using a Chinese IME with an alternative keyboard layout #

It can be observed that key labels for various Chinese input methods, including Zhuyin, Dayi and Cangjie, were printed on the key caps on my old keyboard. These aids for Chinese IMEs were not useful to me since I had the key mapping table for English letter to Cangjie letter code memorized by heart when I was much younger.

Since a Chinese IME is an input source configured at the same level as an alphanumeric keyboard layout like Dvorak, I needed to switch the alphanumeric layout to Dvorak in Chinese IME software gcin on Linux and OpenVanilla on Mac.

Unfamiliarity with the QWERTY layout on a physical keyboard after long-term exclusive touch typing with the Dvorak layout is a problem when I have to type on other people's computers. While I can look at the keyboard and type with two fingers as if using a virtual QWERTY keyboard on my mobile devices, typing in QWERTY becomes slower and more error-prone than before the switch from QWERTY. As a result, I scored a below median score in the analytical writing section of the GRE General Test, as I was not able to type long passages in the 30-minute time limit for each essay on the keyboard with a fixed QWERTY layout in the test center.

Another inconvenience is that users of QWERTY layout who try to type on my computer would get frustrated by my "non-standard" keyboard layout. This problem can be easily solved by keeping QWERTY in the list of system keyboard layouts and switching between them whenever necessary using the shortcut key Ctrl + Option + Space.

Some users of the Dvorak keyboard layout reconfigure keyboard shortcut mappings in software to avoid clumsy two-handed shortcuts with, for example, Z/C/V. This is often done by remapping shortcut keys to the same physical positions as in QWERTY layout. While this approach can free one hand for mouse usage, it has not been a problem for me to always using my keyboard with both hands since most common operations can be initiated with keyboard shortcuts. For example, I use the arrow keys to move the cursor, Cmd + ` to switch between windows, and Cmd + Tab to switch between applications in Mac.

When I learned to type in Dvorak, at the time I was not aware of the other more obscure layouts that might be better than Dvorak. Examples of such other layouts are in abundance, including:

However, it is usually regarded that a switch from a non-QWERTY optimized layout to another is not as cost effective as switching away from QWERTY. Therefore, I decided to keep typing in Dvorak for the foreseeable future.

Some external links to insightful articles about alternative keyboard layouts are provided as follows.