I joined an art club workshop on August 4, 2018 and worked on a piece of wooden artwork as shown in my photograph. I was provided with a clean cut circular wooden plate and a soldering iron gun for use as an engraving pen. The wooden piece was supposed to be made into a door plate but I was free to put anything I could come up with. I completed the artwork from conception to product in a single day. The sequence of steps that I carried out was as follows. 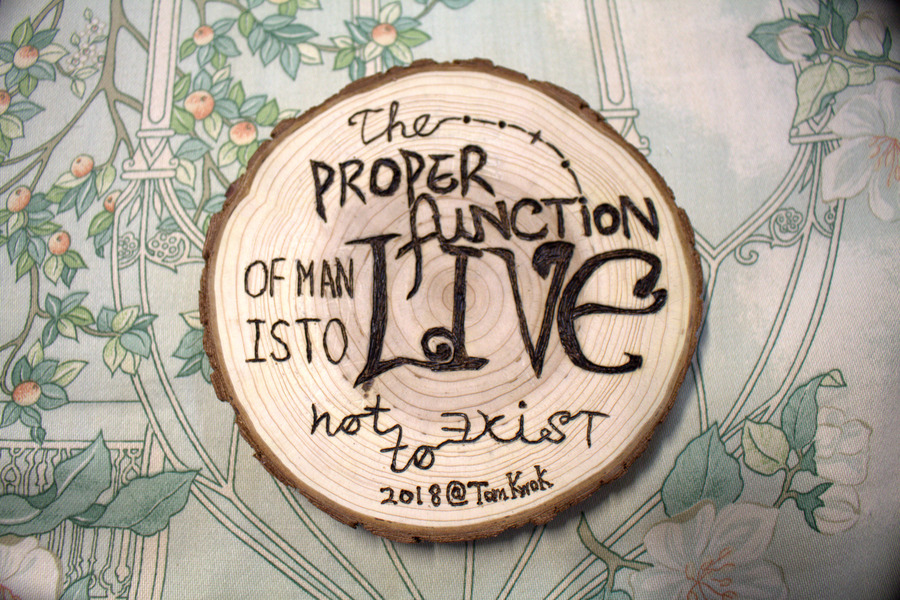 If you look closely enough, you may notice that there is a blemish around the turning point of the letter L due to a mistake in operating the engraving pen. It is a hard to make a perfect piece of artwork.

As I was preparing materials for this post, I read about the story of Jack London to understand why I instinctively chose that particular quote at the time. With my lack of physical space and personal space at home, deprivation of material utilities and opportunities to travel to other places in the world, I found descriptions of Jack London quite relatable to me:

"He wanted the best of everything... he was trying to make up for what he was deprived of as a kid."

A lot of my artwork is digital. I have been continuously updating with subtle iterative improvements the stylesheets of this website, which were based on a basic blog theme template. I would never be totally satisfied with a design. I have implemented fixes for issues on color, alignment and styling. An example in each category is as follows.

I also introduced more graphics to the website, including avatar image in header, montage images in index page and original favicon design. Images in posts were captioned in small text whenever necessary.

Any creative expression as artwork #

My graphical creative work presented on this website are in the following forms:

In general, I aim to publish work that is carefully crafted, structured and organized. This means that a lot of effort and thought have been given to perfect the details.

Nonetheless, the same standard has been applied to my private work. Study notes and computer programs were holistically written like poems. I try to write computer code that is high-quality and not spaghetti. I try to be a good cook. I avoid working with code that is hard to understand, ad-hoc and patchy, redundant and littered with leftover unused parts.

As an extra important note, there are conceptions that are endemic in the place where I grew up that hinder creative work. My counter-measures to such conceptions are as follows.

Think deeper and do less grunt work. This is to counter the conception that one should work harder by executing things mechanically more quickly without thinking. This type of bad work usually comes directly from being subservient to and/or programmed by other entities. However, this is what robots do, while humans can aim to solve problems more efficiently. In particular, focus on issues that are associated with the root cause, and avoid spending time on patch-up work on systems constructed with a weak foundation.

Present less after trying more. This is to counter the conception that a lot of things presented indicate a lot of hard work. However, this is not always the case, and the opposite is often true. For example, more words in an article does not necessarily mean more information presented or more effort spent in writing. A piece of work that is succinct and repeatedly edited is preferable over lengthy unreviewed work with redundant features.